Burring is a type of forming that was originally used for metal working.

It was used to open holes in sheet metal and then tap them.

We applied this technology to forming piping branch.

Upon a request from the pipe fitting manufacturer that has the highest market share in the world, Araki took a lot of trial and error to find out the piping configurations that were simpler, required less welding, had a longer life, and performed better.

After repeating development and testing, Araki has pioneered this burring forming technique at last.

With this technique, stress caused by vibrations or corrosion can form cracks in the welds. 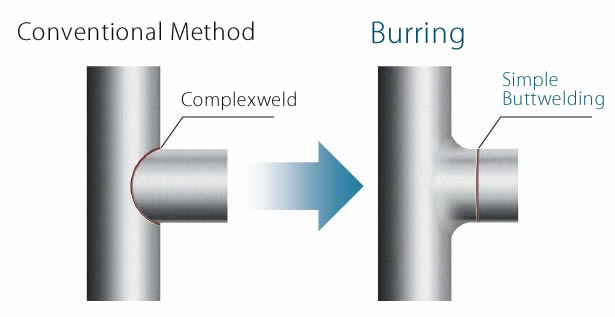 By forming branch joints into the pipes themselves, we are able to greatly alleviate negative issues of conventional branch joints.

There are many uses for this technology, including pipes for building construction and sanitary pipes, large vacuum vessels, energy supply pipelines, and structural poles.

The wide range of demands will be promising.